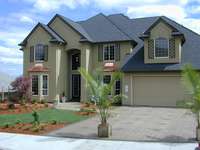 A Walk Through The Pierson

This traditionally-styled home plan will stand the test of time, both aesthetically and functionally. A grand staircase anchors the two-story foyer. To the left, French doors lead into a private den with a bay window and an attached bath. To the right, two columns stand sentry at the dining room, which boasts a bay window and an adjacent butler's pantry, where tableware and wine are stored. The living room is made majestic by a columned and arched entry, a two-story ceiling, an angled wall of windows, and a fireplace. An architectural hallmark, the angled wall of windows repeats in the family room and breakfast nook. Planters and display niches decorate the hallway on the second floor. The impressive master suite is decorated with stepped ceilings in the bedroom and bath. The bathroom houses a tiled shower and a whirlpool tub in a tiled deck. The laundry room is located beside the bonus room.

Some of the features of this home are 'European'. European homes come in many guises, since the term reflects homes styled after those in many countries; English Tudor, French Country, and Dutch Gable, to name a few. Beyond the country of origin, there's also the period of history from which the style emerged; Georgian, Victorian, Greek Revival; the list is almost endless. The homes shown in the collection below feature elements inspired by those found in countries across the Atlantic.

Georgian architecture is the name given in most English-speaking countries to the set of architectural styles current between 1720 and 1840. It is eponymous for the first four British monarchs of the House of Hanover—George I of Great Britain, George II of Great Britain, George III of the United Kingdom, and George IV of the United Kingdom—who reigned in continuous succession from August 1714 to June 1830.

What's Included? Which Construction Package Do You Need? Other Items You May Need for your Building Permits
High-Res Mktg Images $30

Are you selling a home constructed from these plans? License the renderings and marketing floor plan images for use on MLS, on flyers or on your website. (Note: we don't offer photography licensing)

Tell us what you'd like to change, and we will prepare a quote to implement your required changes

How much will this home cost to build?

With StartBuild, You can find the construction costs to build this home plan in your location and with your specific material choices

You can find this plan in these related styles and collections

Builders known to be experienced constructing this home include:

Why you should buy your Mascord plan directly from us

We are the designers of every home displayed and available on this website. Though you may sometimes find our home plans advertised and for sale elsewhere both online and in print, it makes sense to purchase your plan directly. Place your order confidently knowing your home plans come from the original source, and that you have the support of the designer of your home.

As the original designer and copyright owner - we can beat any lower price you find a Mascord plan for sale - on any website authorized to sell our plans. Before you make your purchase, simply give us a call, direct us to the site you have seen the lower advertised price, and we'll not only match that price - we'll also give you a further 5% discount and extra special customer care :-). (The advertised plan must be the same as the plan being purchased, including product type - 5 Set, 8 Set, Hybrid, Reproducible, or CAD File, etc). Our standard price-beating guarantee refers to regularly listed prices, but if you find any coupon, special offer, bonus offer, freebies or rebate offered on a competing website, call us, tell us where it is, and we'll see if we can beat that too!

If you have questions about an element in the design, or your contractor has a question during construction - we are able to answer those questions for you quickly and accurately, without the need for you to go through a third party.

We support all of the plans we sell, and by purchasing direct, you're able to take advantage of the high level of customer service we provide.

To return or exchange your home plans, simply call customer service at (503) 225-9161 within 14 days of purchase for information on how to return your unused printed plans to us. Unused plans should not be marked on, defaced, or copied. Packages that include electronically delivered house plans - packages that include PDF and CAD files - are non-refundable and non-exchangeable. All paper plan exchanges are subject to a 20% restocking fee to cover printing and shipping costs.

Will This Design Work For Your Location?

The base code requires that the design of your structure meet certain requirements. The code allows for a couple of ways to meet these requirements. The first method is known as "prescriptive" wall bracing, and is built into the code as prescribed building elements that must be included at specified positions of the building. Prescriptive methods are acceptable as long as the structure's design fits within certain limitations (wall height, window size/location, etc.). The second method is to demonstrate, by engineering analysis, the forces imposed upon the structure, and the design of structural elements to withstand those forces. Whereas the prescriptive method imposes certain limitations on the design of the structure, the engineering analysis of the building allows for greater flexibility in the design, while ensuring it can withstand the actual natural forces the structure will experience.

In almost all cases, Mascord designs will require site specific engineering analysis. This analysis is required to be conducted by a professional, such as a structural engineer, who is licensed by the state in which the structure will be built. The analysis is specific to the exact building site - for this reason, we do not have "pre-engineered" plans that can be built anywhere. An engineer will need to review the plans and provide an engineering analysis report and additional drawings and specifications to go along with your plans for permit submittal. You should allow for additional time and expense to complete this process.

Some regions have additional engineering requirements, such as earthquake-prone areas of California and the Pacific Northwest, or the Gulf, Florida, & Carolina coasts that are frequented by hurricanes. Additional Wind and Seismic engineering drawings are required to accompany your home plans to obtain a building permit in most areas. These additional drawings need to be provided and stamped by a professional licensed in your state. In most cases we have working relationships established with engineers who can help you obtain the necessary drawings cost effectively, or you are welcome to source your own local engineer.

When the design includes retaining walls, these will also require engineering. Although the code provides for some prescriptive basement and concrete/masonry wall designs, these only work in limited situations. The use of site-engineered retaining walls allows for much greater design flexibility and ensures that the walls are designed specifically for the design loads, unique soils, fluid pressures, and drainage characteristics at the building site. It makes little sense to place the most expensive investment a family typically makes onto a foundation that is not designed for the unique characteristics of the land on which it is set.

All Mascord house plans are designed and detailed to conform to The International Residential Code (for orders out of state), or Oregon and Washington local state codes (for orders in those states).

Your area may have also have specific energy codes that have to be followed. Compliance could include filling out forms providing evidence that your construction drawings meet requirements. In many cases the forms are simple and can be filled out by yourself, or with the aid of your General Contractor.

To find out exactly what drawing details you should expect with your Mascord house plans, see "What's included in a Plan Set?"

If you aren’t sure what may be required, contact your building department and ask for a list of all of the items they require to submit for and obtain a building permit.

We typically calculate and provide sizing of beams for a snowload of 25 psf. You may need beams sized to accommodate larger roof loads specific to your region. We are able to help with this; please speak with our sales staff to discuss your options.

Building jurisdictions in several states - including California, New York, New Jersey, Nevada and Illinois - require that your home design is reviewed and your entire set of construction drawings is stamped by a local professional. If you are building in such an area, it is most likely you will need to hire a state licensed structural engineer to analyze the design and provide additional drawings and calculations required by your local building department.

In addition to the construction drawings, you may also need a site plan that shows where the house is going to be located on your chosen property, along with any grading and water management / septic system requirements.

Although we make every effort to ensure the accuracy of our design information, we reserve the right to make corrections on our floor plans or elevations as needed.