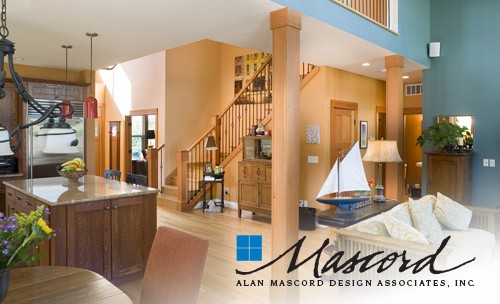 When plans for remodeling their historic home proved beyond their reach, Annette and Charles Chapman built an updated Arts and Crafts-inspired home that allowed them to have the amenities they desired while staying in the neighborhood they loved.

The Edgewood Park neighborhood near downtown Vancouver, Washington offered Annette and Charles Chapman everything they wanted: a view of the Columbia River, walking distance to the downtown area, and close proximity to Officer’s Row, a pictorial, tree-lined street filled with restored historic homes that once served as housing for soldiers, officers, and families stationed at Vancouver Barracks. So when Annette, a real estate agent, came across a 1906 property for sale in the area, she bought it without hesitation — even though her husband Charles hadn’t even seen it. “I had to make a decision right then and there and he wasn’t there,” Annette says with a laugh.

Charles wasn’t disappointed, though. He too was attracted to the distinctiveness, convenience, and character of the neighborhood. Both have seen their share of new neighborhoods, and were turned off by the lack of uniqueness in the homes. “The new neighborhoods here feel cookie-cutter,” Annette says. “And the houses are right on top of each other,” adds Charles. “You’re looking into each other’s bedroom.”

The Edgewood Park area was a much better fit for their personal taste and professional lifestyle. With so many positive features to the area, Annette and Charles felt they had settled in their dream location. After eight years, they could only find one thing that wasn’t ideal about Edgewood Park: their house.

At just 700 square feet, the 1906 structure was cramped, even for just two people and their pets. In the interest of restoring the historic structure, they considered remodeling, but ran into a host of costly challenges. The home’s ancient plumbing was stapled to the outside walls in a retrofit that would require a complete redo; the wiring was a mishmash of out-of-date technologies that also dictated starting over — especially if they wanted the capabilities to handle today’s technologies. But the nail in the coffin for their remodeling hopes was a crumbling basement foundation, the repair costs of which proved exorbitant.

Tearing down the aging structure and building a new home, was the couples’ next best option. Starting with paper and pencil, the Chapman’s began sketching their ideas onto paper. Annette and Charles had three main criteria for their new home: a side-load garage, a main-floor master suite, and a dining nook that faced the early morning light. With the newest home in the neighborhood being 50 years old, having an exterior that blended in with the historic styles of the neighborhood was also an important consideration. Charles visited many of the older neighborhoods in Vancouver and Portland, taking note of what he liked in the exterior details. By the time their ideas were flushed out, Charles had drawn up three plan possibilities. 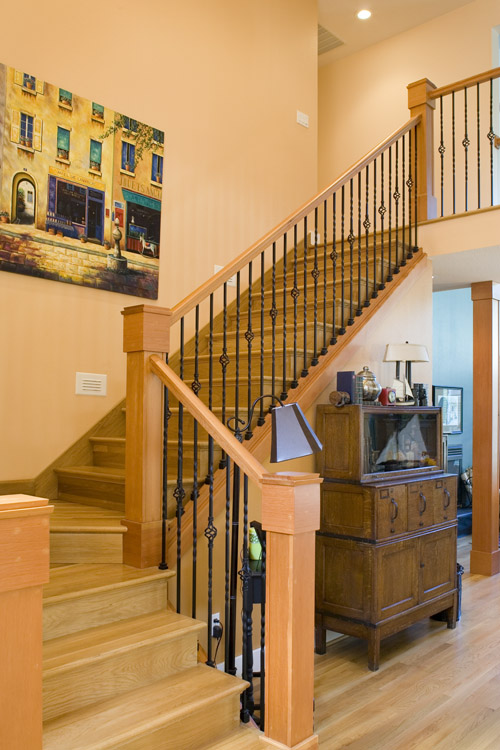 The couple again hit a stumbling block when they discovered that the cost of drawing and engineering their custom plans was prohibitively expensive. Temporarily sidelined, the couple took their search online and found plan 2270CA from Alan Mascord Design Associates, Inc. “The plan matched almost exactly to what we wanted as far as the floor plan. The outside looked a bit different, but the floor plan was almost exactly the same,” Charles says. The home’s Craftsman-inspired exterior was appropriate for the neighborhood, and even though it didn’t have all the features Charles envisioned, “we got them in a more modern version,” he says.

Another advantage of the floor plan is its compact footprint. Even with its three-car garage and a main-level master suite — both of which often add width to the typical home — this design is less than 55 feet wide and just 54 feet deep, making it especially ideal for a restrictive infill lot, such as in the Chapman’s case.

Cement board and shake siding and manufactured stone veneer were used to clad the exterior, affording the ideal mix of longevity and historical style. Defined by its twin gables straddling the front porch, the facade recalls a mix of design styles, according to Alan Mascord, of Alan Mascord Design Associates, Inc. “The exterior is an attractive mix of Arts and Crafts, Rustic, and Lodge styles all blended together…The appeal [of the exterior] is mainly the heavy timberwork in the front gables.”

In order to save money and include the upgrades they wanted, Charles and Annette decided to take on the role of building the home themselves. Charles, who has previous experience in the remodeling industry and who also handles all of the remodeling and repairs for the couples’ rental properties, served as the general contractor. Also a full-time flight attendant for Alaska Airlines, Charles had a flexible schedule that allowed him to supervise subcontractors during the day and work in the tasks he took on himself when his schedule permitted.

The project took just over a year to complete, a remarkable feat for owner-contractors, considering that the first month was spent tearing down the home and salvaging the materials to a friend. And even though the time commitment was demanding, the couple points out the many benefits of building their own home. “We did a lot of upgrades,” Charles says. “When you do it yourself, you see why some builders put in vinyl and square granite instead of slab. It all adds up and it cuts into your profit. But when you’re doing it yourself, you can do the upgrades that you want and [the home is] done the way you want it.”

Their beautiful home is a testament to their hands-on oversight of the project. Naturally stained oak floors and vertical-grain fir trim serve as backdrop for the nature-inspired colors of the entry, kitchen, and great room. These public areas serve as the gateway into the home and provide the main living and entertaining spaces. The openness is a welcome change from their former tiny home, Charles says. “[The great room] is open and intimate. It’s kind of like opposites that really complement each other. It’s open…and yet you still have the division of rooms.”

Frequent entertainers, Annette and Charles customized the public areas to suit their entertaining style. During the holidays, the couple erected a 16-foot Christmas tree in the great room, the size and stature of which proved stunning for a neighborhood party they hosted. “It’s really a nice place to entertain,” Annette adds. “You can have 40 people in here and there’s plenty of room for them to mill around. It’s a great house for entertaining.”

To accommodate their serving needs, the couple modified the kitchen layout to include a 4x7-foot island that provides a large space to prepare food and display buffet-style appetizers. 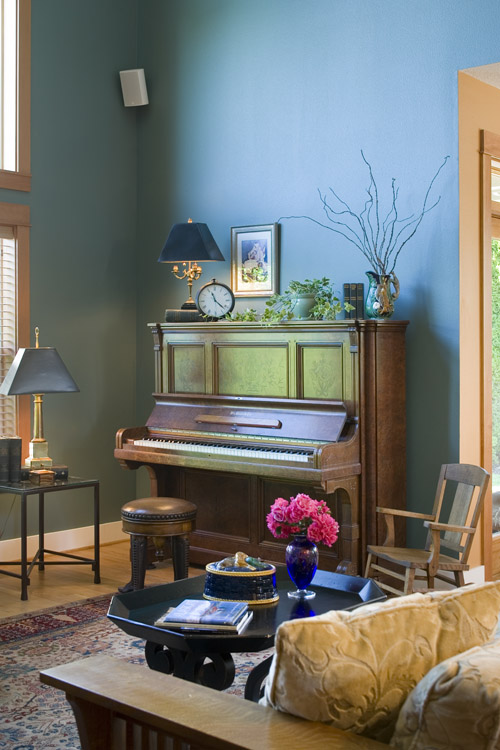 The Chapman’s kept the television out of the great room, preferring to emphasize connecting and conversing, rather than television viewing, when they are hosting guests. Instead, the television is located in one of the upper-level bedrooms, which was converted into a living space. “It’s a different lifestyle,” Charles says. “Most people have a giant nook right next to the fireplace. But we just didn’t want to have a TV as a main focus when you have guests over.”

In the absence of media equipment, an upright, antique piano serves as a conversation piece, along with the spectacular wall of windows along the rear. “[The window wall] lets in a lot of light,” Charles says. “During the daytime, I never turn on any lights because there is so much light that comes in.”

At times, the bay breakfast nook, which Charles wanted to face the early-morning light, gets so much sunlight, the Chapman’s find themselves lowering the blinds for light control.

The upper-level bonus room was finished as an exercise room, complete with rubberized floor and vaulted ceiling for jumping rope. The other upper-level bedroom is used as a guest room. The main-level master suite is tucked behind the garage and next to the public areas, granting access to all of the main rooms without the need for traveling up and down a staircase. The arrangement gives Annette and Charles the option to live in the home even if traveling the staircase becomes cumbersome.

The home’s den and dining room also were important features of the floor plan to Annette and Charles. The dining room houses their formal Craftsman-style dining room furniture and is used on holidays, special occasions, and dinner parties. The den functions as the couple’s home office, where Annette runs her real estate business and where the couple manages their rental properties.

Expanding the living spaces to the outdoors are two bluestone patios, one in the backyard and one in the side yard. The Chapman’s worked with a neighbor friend who is a master gardener to help them plan an area replete with lush vegetation, privacy hedges, and flowering perennials.

Now that Annette and Charles have a beautiful home to match their ideal neighborhood they describe themselves as “home bodies.” They say rather be home than almost anywhere — just as it should be.

To view details of their home- Plan 2270CA - The Larchwood, click here.

Not So 'Grimm' Custom Contemporary