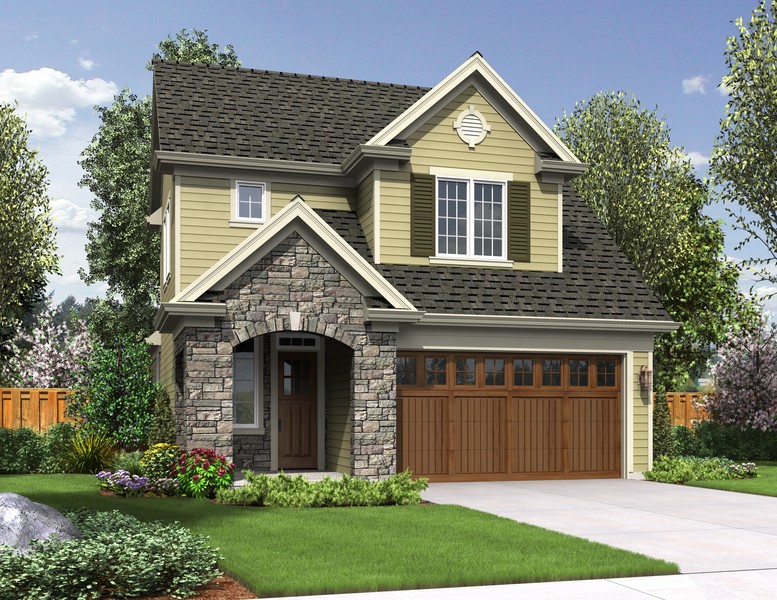 Throughout the history of home design, preferences have shifted regarding the division of interior space. In the Victorian era, for instance, rooms tended to be cut off with walls, so each could be heated individually. This was a large change from the centrally heated open-fire floor plan homes of the middle ages. Frank Lloyd Wright was the first American modern-era architect to apply an open design to his creations. Innovations in heating equipment and ductwork had increased energy efficiency and heat delivery, making open designs more cost effective. Previously, open design was applied only in offices, where “bullpens” or “cube farms” of workers allowed businesses to save on utilities and rent. (As we’ll see a little later, an open floor plan is also conducive to team brainstorming.)

Open floor house plans often include several different “rooms” in the same space. Most commonly, the kitchen, living room and dining room are combined into one large, open area, sometimes called a great room. Lofty ceilings and large windows are often incorporated into great rooms; these ingredients make any space feel even larger.

If you’re thinking about what to include in your dream house plans, you may be interested to learn about the advantages of an open floor plan, listed below.

The world’s leading companies and universities understand that open common areas encourage innovation. For instance, Steve Jobs purposefully created the main Pixar building to extend like hubs from the middle of a wheel. In the middle atrium, he placed the coffee shop, the mailboxes and the cafeteria – basically, Jobs wanted to give every employee a reason to visit the center space every day. As Pixar president Ed Catmull explains, Jobs “wanted to create an open area for people to always be talking to each other.” Job’s genius was to recognize that an open floor plan design could bring people together. While getting a coffee, a writer might bump into a sound technician and get a new idea that wouldn’t have come to him otherwise. Jobs understood the power of space to encourage interactions.

Similarly, open floor house plans create an expansive common area where the family can gather. Family members are more likely to interact when there’s a comfortable shared space. In more closed-off home designs, each son, daughter, mother or father is more likely to head to his or her room to be comfortable, thus limiting the opportunity for positive family interactions.

2. Allow for more flexible use of space.

Bring in a few more chairs when the relatives stop in for a visit. Or, if you want your common area to feel more private, put up some screens to block off a smaller, cozier area. It’s much easier to make these adjustments with an open floor plan, since you don’t have to reconfigure walls just to make your space more usable.

That said, it can take a little creativity to create separate “rooms” within open floor plans. For instance, to make a separate living room area, you might use rugs, lighting, and furniture placement.

Those who have lived with open floor house plans can vouch for the fact that open plans make any home “live larger” than it would otherwise. If your dream house plans must be limited to a certain size lot, an open floor plan can make your limited square footage seem more sizeable.

Architects would explain that removing extraneous walls opens up lines of sight, making the same space appear larger. Humans are naturally more comfortable when they can see farther – after all, many scientists believed we first stood on two legs in order to see far across the grasslands of the savanna. By choosing an open floor plan, you’re using human biology to create the sense that your home is spacious.

4. Create the perfect space for entertaining.

A good party is all about flow; guests flitter like butterflies, picking up a little conversational nectar with each social interaction. Home design can influence social gatherings. Open floor house plans make it easy for guests to flow from one discussion to the next. If you’re looking forward to entertaining in the home created by your dream house plans, an open floor plan is the way to go.

When you choose open floor house plans, chances are you’ll spend less on interior framing, supplies and labor, since your overall design will require fewer walls to be built.

The home shown above is The Barberton House Plan 21144.