We're Putting the Pedal to the Metal - Literally!

We're all very busy here at Alan Mascord Design Associates, but we're knocking it up a notch! The Disturbed Racing team's Top Alcohol Funny Car, co-owned by Alan Mascord, is figuratively and literally hitting the ground running, having had several successful test runs ahead of a tough first racing season ahead of them.

The Mascord - Marshall Top Alcohol Funny Car (TA/FC) is a class of dragster capable of developing a whopping 3,500 horses and theoretically reaching speeds of up to 270 miles per hour in under 5.4 seconds on a 1,280-foot track (1/4 mile). This particular car is a Mustang, but unlike any Mustang you’d see on the road. The Mascord - Marshall Funny Car started with a body and chassis purchased in Virginia, and modified Chrysler Hemi engines already on hand. Chris (owner and experienced driver of both this car and previously a nostalgia class dragster) gave the body a sharp new paint job, made a ton of mechanical upgrades and brought the car up to the stringent safety standards set by the National Hot Rod Association. The methanol-powered engines for this car were built by Bob Miner of California.

To date, the Disturbed Racing team has completed several test runs, achieving top speeds of 244 MPH in 5.83 seconds. They’ve spent two weekends at the Woodburn Dragstrip, where they’ve been testing the car and making steady improvements to its speed and performance. Their first competitive event is scheduled for July 17 through the 19th – the Lucas Oil Series at Woodburn, OR.

After that, you may be able to see Disturbed Racing in action at the following events: 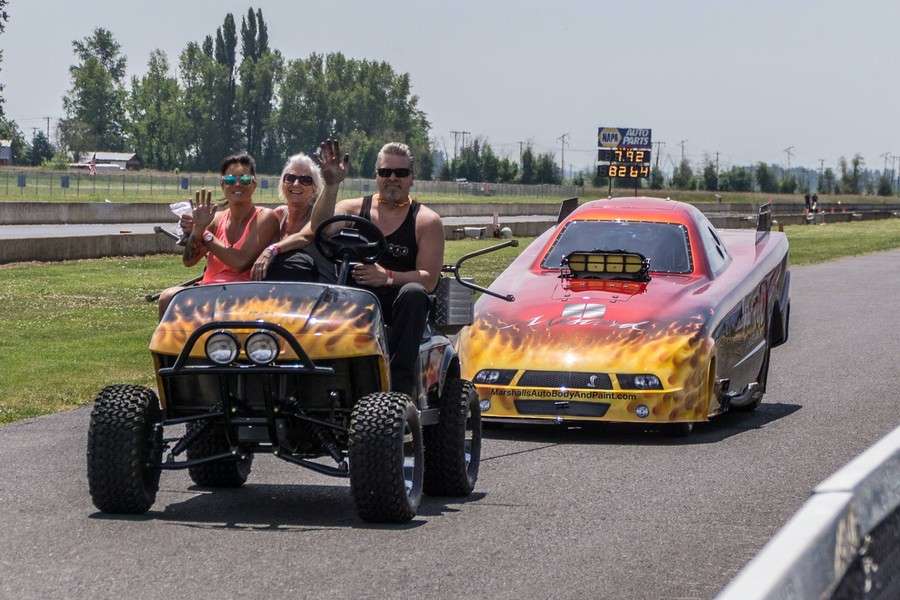 If you’re unfamiliar with drag racing, you’ll be surprised to learn about the incredible amount of work that the car’s driver and crew do before each and every run. Between runs, the Disturbed Racing crew fine-tunes the car to increase its speed and performance, starting with the car’s sensors that feed data to a laptop. Chris uses that data to compare the results of each run and make improvements to the car.

Meanwhile, the pit crew dismantles the car, removing the body so that they can drain the oil and remove the spark plugs, oil pan, transmission and clutch discs – all while the car is still hot. New parts are installed, a specialist checks and resets the lifters and crew members refill the oil. All of the old parts are saved for later, including the clutch packs, which can be resurfaced and reused for future runs.

Once the tuning and maintenance is compete, the crew brings the hot rod down from its stands, tops up the fuel and oil, and repacks the car’s parachutes. Right before the next run, they replace the body and then tow it to the staging area.

Chris Marshall, owner, driver and tuner, heads the Disturbed Racing team up. His wife Briana is also part of the crew, handling staging and fluid replacement. The rest of crew is staffed by family and friends, including:

Players.. are you Ready?

Now You Really Can Build Your Dream Home Today!

5 Great House Plan Features That Your Dad WIll Love

We have plenty of contemporary home designs just like this with plans ready to purchase today. View this collection, and use the search features to narrow the…

Know what you're looking for in your perfect design? Enter your criteria in our search page and see what we have to suit your requirements. Remember: only en…

A garage isn’t just a place to park your car. For some people, the garage is a way of life. You need a garage that can handle the dreams you have for it. Vie…